Well, at least in the school. Kyorg has been catapulted into fame after somebody uploaded a video of her in the bus, and now everywhere she hear that everybody’s talking about “how she can get along with the boys so easily” in a contemptuous way…

Every year, Joe loves to watch the ball drop on new year’s eve, but this year he thought he’d enjoy watching the balls drop, right on his dick.

Ah, Joe is so shy, but after some stimulus he can change his attitude, beware!
By the way, why jackalopes are often confused with deers, and mostly when the year changes, would you be able to explain me that? 🙂

Yeah, Frostcat was so happy to see a bunny girl in the woods, because she introduced him to a “new world” of yiff!

While the rest of their tribe is getting ready for the harvest, Edna decided to have her brother join her to get a head start for next year’s harvest by planting his seed in her fertile womb.
[Indian Kyuna by Kyunawolf.]

When strangers help each other out, it is definitely a great Thanksgiving!
[Indian Fernando by Elfensciuridae.]

Meanwhile, during the Xmas season, there was a ballet performance at St Lovejoy…

Zoop and Joe Muck get into the Christmas spirit! 😉

Scotty caught Milky mouse and she’s a perfect match for him in every way.

Zippy found Joe the “reindeer” and takes care of feed him and give some “eggnog.” If Zippy wold sleep with Joe? We don’t know until X-Mas. 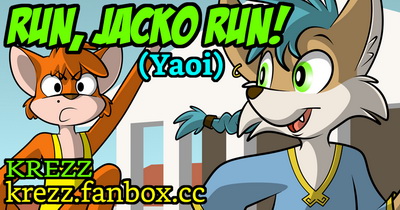